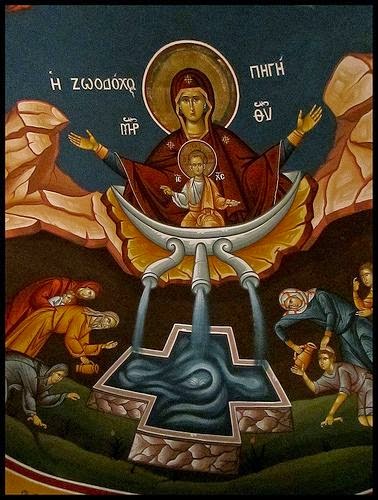 When I go into my house, I shall repose myself with her: for her conversation hath no bitterness, nor her company any tediousness, but joy and gladness.
Wisdom 8:16

In Part One we looked at going into the house of our heart and reposing there by leaving the things of the world behind us. Now we shall look at the companion with whom we repose and her conversation. Or, to put the same thing differently, we shall consider that solitude and silence are not the objects of meditation. These two things are required in the same sense that a ticket and something to read might be needed for a long train journey. That is, we do not undertake such a journey because we want to buy a ticket and a magazine. Similarly we do not seek solitude and silence in order to be alone and quiet but in order to find our way into union with the divine. I am labouring this point because humans have a terrible habit of confusing means with ends. They are rigid and inflexible about things which are negotiable and try to negotiate with things which are fixed and unalterable. Silence and solitude are techniques no more and no less, they can be dispensed with. What we should not do without is our longing to be one with our Creator.

The author(s) of The Book of Wisdom and The Book of Proverbs (by convention King Solomon in both cases) personifies the Wisdom of God as female. We tend to think of the ancient Jewish religion as very male dominated and the God of Israel as very male indeed so this introduction of the feminine motif seems surprising. In the final part of the series I hope to look at the role of Mary in Christian meditation and will return to this aspect then (God Willing). For the moment I will observe that Christian writings on spirituality for a thousand years and more have characterised the human soul, whether it be of a man or a woman, as 'she' and conceived the union of the soul with God as the Bride being united to the Bridegroom or the lover with her beloved.

The intuition underlying both these approaches is that the complementarity between men and women is an apt comparison for the relationship between the spirit of a human and the spirit of the divine. In the light of current controversies there is a danger that insistence upon this point will distract people into the debate over same-sex relationships therefore, with regret, I will leave this to one side. In any event what Solomon was asserting was that when we have arrived at an accurate perception of our heart-house we realise that we are not alone. The guest, who has always been there, usually unnoticed, is not another aspect of ourself. It is another person. What is distinct about Christian meditation is the insistence firstly that its purpose is to deepen a relationship rather than to arrive at some abstract insight or some ideal state of serenity. Secondly, the relationship is with the specific person of the Holy Spirit of the Triune God. Our task is to invite heaven into our hearts, His task is to lift our hearts into heaven.

The mechanism of this process is described by Solomon as her conversation. It is not 'her monologue' we have our part too. As the psalmist notes His ear hears our hearts when they have been prepared for this encounter. At this point many writers on meditation would insist that the conversation though real is wordless. This is not necessarily true. It may be the case that at its highest level the encounter with the divine is an exchange without words. However as a young hobbit once remarked-


Dear me! We Tooks and Brandybucks, we can't live long on the heights.'
'No,' said Merry. 'I can't. Not yet, at any rate. But at least, Pippin, we can now see them, and honour them. (The Return of the King, J.R.R. Tolkien)

There is a tendency in spiritual exercises to run before we can walk, to think that we can attain in a measurably short time the great experiences of ecstasy and divine union which the great Saints and Desert Fathers report. It is not so. Success or failure depends upon two things, our humility and the generous gifts of the Holy Spirit. On this subject Scripture notes unequivocally God resisteth the proud, and giveth grace to the humble (James 4:6) The insistence on wordless dialogue is another example of confusing means with ends. What is, I think, true however is that whether with words or without the conversation should involve thought but exclude thoughts. Each individual thought or idea, however brilliant or worthy it may be, forms part of the parade sent forth by the ego which was mentioned in Part One. If we become attached to it then it and not God or Spirit is the subject of our meditation. By thought is meant holding the attention fixed on the ladder which is leading us towards God and following it up rung by rung.

All of which is very abstract. Catholic tradition proposes a number of ladders to help us on our way. Some of these are simply continuations of the methods we used to arrive at the state of repose in the first place, frequent short prayers, gazing upon icons, holding a Gospel episode like the Passion before the eyes of our heart. An action can change its effect when we change our intention regarding it. If we begin using it to expel the world from our heart-house and then use it to draw closer to our divine guest then that is the effect that it will have assuming we do this humbly in hope and and subject to the will of the Holy Spirit. Another method is the form of Scripture reading known as Lectio Divina. We read a short passage of Scripture and then hold it, or a phrase from it, or one word from it in our thought while resisting as far as possible particular thoughts about it. This can form part of our conversation with the Spirit, it might be that a particular word or group of word speaks to us now, for the first time because the Spirit has selected it for us and brought it to our attention. Holding this word then raises us up nearer to Him. It may be that at some point we leave it behind and enter into the wordless exchange, it may not happen like that. Either way it is all gain, because we have been closer to God than we were at the beginning.

Another method, which in a sense is similar to each of the above or, arguably, is the essence of all the above is the simple repetition of the name of Jesus (we can use the name of Mary too but of that more in the final part.) Is this a mantra in the classic sense of the word? Again it would be a distraction to get into a discussion about that here but I would observe this. Christian thought asserts that the efficacy of the divine name rests in two things His response to being called and our co-operation with His initiative. We call on His name because we want Him and only Him. At His coming He drives away thoughts (whether generated by our ego or by malevolent spiritual powers) by His power and gives Himself to us in the form He thinks best for the duration He thinks best. During the course of the conversation our use of His name can be successively an invocation, and expression of our deepest desires, our assent to His initiative and an expression of gratitude for His gifts. As already mentioned the same action can proceed from different intentions and so have different effects.


In the next part I hope to write (sweetly and interestingly) about bitterness and tediousness.