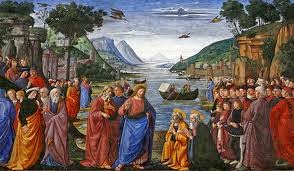 ...Everyone who has listened to the Father and learned from him comes to me.
John 6:45

Once upon at time, long ago and far away, I was a more than usually rebellious schoolboy. One of the things against which I kicked was the way that texts were, in my youthful opinion, ridiculously over-analysed. It seemed to me that the most important thing about a piece of writing, prose or poetry, was the reaction that it provoked within the person reading it. Poring over words in order to discern what the author may have meant by this or that phrase or what we could learn about his (always a 'his' in my day) life and state of feeling when he wrote them seemed altogether besides the point. I was, I now realise, an unconscious Platonist. I was looking for the invisible reality concealed within the visible form.

My attitude was not, I think, entirely without merit. The intellect, which is the tool we use in text criticism, is a means of describing or analysing an experience or phenomenon but it is not the experience or phenomenon itself. The notion that we can understand something just because our intellect has thoroughly categorised it is not only false but is actually a misleading delusion. If I grasp today's lunch with my mind but not with any other part of myself then I remain hungry. Each of us has a mind but we are not mind alone. To understand something it is necessary for our feelings and emotions to enter into that thing and for it to enter into ours as well as for our discursive thought to be allowed to process information relating to the object concerned.

Having said all of which, my teachers had a point. Applying our powers of analysis and synthesis to a text and bringing in knowledge about historical context allows us to re-present that text to ourselves so that the experience it provokes can be continually altered in the light of new information gained. That is, textual analysis is not an end but a means. It is like adjusting the light in an art gallery. The more light there is the more clearly we can see the picture but when we look at it in the new light it is still the picture and not the light that we respond to.

All of which is a long and complicated apology for my next sentence. In the short saying by Jesus which I have quoted we can see at least three separate but interlinked links in a causal chain that leads to a life of faith. First, we must listen to the Father. Second, listening alone is not enough we must also learn from what we hear. Thirdly, if we sincerely listen and genuinely learn then we will inevitably come to Jesus. I realise that non-Christians read this blog but panic not if you think the last proposition is gratuitously sectarian I will talk about that point in due course.

The audience to whom our Lord spoke knew who the Father was but they, for the most part, had only a hazy idea what listening to Him actually entailed. Today many people are vague about both parts of the Father-listen equation. What I think the Saviour meant was hinted at in His earlier dialogue with a Samaritan woman God is spirit, and it is necessary to worship God in spirit and truth. (John 4:24) The Father is the Creator of all things who is not an abstract ideal but a Living and personal God who is in and through all things and who has revealed Himself in Creation and in human history. To listen to Him is, in a sense, to both respond to His presence and analyse His manifestations as if He was the primary text, the text without which there would be no other texts. Concretely, truths about Him can be seen and thought about in Creation itself, in the records of His interventions in human history recorded in the Sacred Scriptures and in the lives and teachings of those Saints who have walked with Him and passed on to posterity what they have learned from Him. But amassing all this information and holding it in our heads is insufficient. Mind is mind, not spirit. We must wordlessly hold all these pieces of data before our spirit so that it can feed off them and then refreshed by them soar on its wings up towards the One Spirit. It is in that communing with the Spirit, beyond words and thoughts that the true listening will take place.

So, having said that the crucial listening experience takes place in a zone beyond words can I use words to say what 'learning from the Father' means? I think I can. In communing with the Spirit you learn that He exists and that He loves you and that that love calls forth a responding love within yourself that longs to express itself. These are things that you now know to be true because your whole being has experienced them. You can use your intellect to analyse and describe these truths but neither your analysis not your description is the truth itself. This means that a person reading your description does not share your experience and is at leasts as likely to disbelieve you as she is to accept what you say. Thus, I have described what 'learning from the Father' means but nobody will actually learn from the Father simply by reading my description and applying their mind to the meaning of my words. Herein lies the reason for the huge gulf in understanding between believers and non-believers. Those with faith taste and see that the Lord is good (Psalm 34:8) Those without try to grasp today's lunch with their mind alone and so remain hungry.

That the fruit of listening and learning from the Father turns out to be becoming a disciple of Jesus is one of these truths which is self-evident to Christians but obscure if not insulting to sincerely religious persons from non-Christian traditions and/or deeply spiritual people who do not consider themselves religious at all. As a Catholic I make no apologies for believing that one cannot enter the Kingdom of Heaven, either in this life or the one to come, by any means other than by going through the door of Jesus Christ, Son of God and Son of Mary. There is a 'however' though. As you do not need to have any explicit knowledge of electricity to use an electric light so it is possible, under certain narrowly defined circumstances, to derive the benefits of the saving power of Jesus without an explicit faith in Him. The analogy only goes so far, incidentally, you can reject the whole idea of electricity and still use an electric light but if you explicitly reject Jesus then He is of no avail to you.

Catholic thought has a tremendously handy concept with the splendidly un-PC name of 'Invincible Ignorance.' In a previous controversy the Church summarised the effect of this state that one may obtain eternal salvation, it is not always required that he be incorporated into the Church actually as a member, but it is necessary that at least he be united to her by desire and longing. However, this desire need not always be explicit, as it is in catechumens; but when a person is involved in invincible ignorance God accepts also an implicit desire, so called because it is included in that good disposition of soul whereby a person wishes his will to be conformed to the will of God. If part of the action of listening to the Father includes access with an open mind to the Christian Scriptures and the teachings of His Saints then those who have no such access, either because these things are not available to them or because their minds have been closed off to them from an early age because of upbringing or ingrained personal characteristics, then they can only listen to Him through the media which are available to them. If their response to this listening is to learn all that they can and follow through on that learning then they are implicitly following Jesus. As I was an unconscious Platonist so they are unconscious Christians.

It is necessary to add though that explicit faith in Christ and incorporation into His Body the Church does have an effect in strengthening faith and in expanding greatly the truth we can hear and respond to. To know Him under a veil is less good than to know Him face to face and so the Church has a duty ever to evangelise everyone who is outside her fold. She has no reason not to seek to convert Muslims, Jews or those of other faiths. As the letter  already cited put it they are in a condition "in which they cannot be sure of their salvation" since "they still remain deprived of those many heavenly gifts and helps which can only be enjoyed in the Catholic Church"

In the figure of Mary, the mother of Jesus, we can see a perfect illustration of one who listens, who learns and who comes to Jesus. She is first introduced to us in the Gospels in the act of listening to the Archangel Gabriel (Luke 1) who has been sent by the Father as an ambassador. She does not only listen she thinks over what she hears she was much perplexed by his words and pondered what sort of greeting this might be. Having heard more she then responds with her whole person Here am I, the servant of the Lord; let it be with me according to your word literally so in this case as she from this moment becomes the mother of the Incarnated Son of God. She also illustrates that this listening, learning and coming to Jesus is not a one off event but a process. Thirteen years later after hearing her Son speak she did not understand what He had said but His mother treasured all these things in her heart. (Luke 2:41-51) That is, Mary was always listening, always learning and always going to Jesus. She was, indeed, the first Christian. In a sense she went to Him before He was conceived by giving her joyful consent to the Fathers will. In this she is our example and our inspiration, our guide and our teacher, the pioneer of our faith. With Mary and through Mary we ourselves can also come to Jesus if, with her we listen to the Father and ascending to Him in the Spirit truly learn from Him.