Sixth Sorrow of Mary: She Receives Her Son's Body 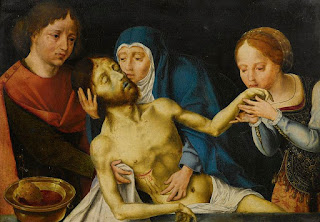 The Blessed Virgin was overwhelmed with sorrow and love. Once more, and for the last time, did she hold in her arms the body of her most beloved Son
(Dolorous Passion LI)

Hail Mary, who held the pierced and lifeless body of your Son next to your Immaculate Heart

Sacred Scripture itself is silent as to the state of mind of the grieving Virgin. "Her soul is in anguish, and the Lord hath hid it from me, and hath not told me." (4 Kings 4:27) It does tell us, though, about her ancestor David's response to the death of his son-
"My son Absalom, Absalom my son: would to God that I might die for thee, Absalom my son, my son Absalom."
(2 Kings/Samuel 18:33)
If David was nearly destroyed with grief over the death of his guilty child how much more must Mary have suffered in being bereaved of her Innocent One?

In the modern era there is a distaste for the focus on the sheer physicality of the Passion and Death of Our Lord that characterised so much earlier piety. It is felt to be morbid to spend so much time considering every aspect of His suffering and the attention paid to the empty shell of His corpse. After all, it is reasoned, the main point of His mission was the teaching He gave us and the reconciliation He wrought for us in the heavenly places. This is a dangerously misleading approach to take. The entire essence of the economy of salvation is that the Word became flesh and dwelt among us.

If Jesus had been crucified without giving the Sermon on the Mount we would still be saved, if He had given the Sermon without being crucified we would still be lost. His body matters. A lot. Of course He did both, and we should never consider the two things, His teaching and His suffering apart from each other. When Mary hugged the body of the dead Saviour close to her Immaculate Heart she was not only transported with her own unimaginable sorrow she was also acting as our plenipotentiary. We to need to come near to the Man of Sorrows in all His humanity as well as in all His divinity.

Jesus had said, referring to His body,  "Destroy this temple, and in three days I will raise it up." (John 2:19) About the Temple of Solomon the psalmist had sung "Its stones are dear to your servants; its dust moves them to pity" (Psalm 102:15) If the Spirit of God had moved the children of the Old Covenant to sigh over the very dust of its Temple how much more must it move us to join with Mary and lament over the bruised, battered and pierced body of our own most lovable and eternal Temple, Jesus Christ.
@stevhep

The painting is Lamentation of Christ by  Joos van Cleve (follower)